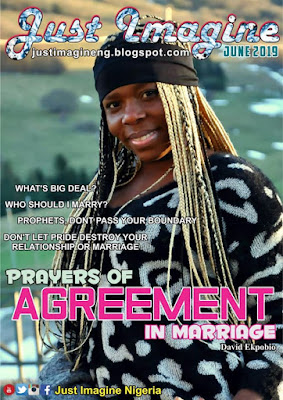 Marriage is a journey of two people from different backgrounds, with different temperaments,with different ideologies, different beliefs, different behavior and character and heading for a God given destination. One of the greatest thing that Can happen to you is getting married in God’s will.You will eat the fruit of it forever and ever.

“A bad marriage is the junior brother of hell fire”.
Your destiny is truncated to a very Large extent when you marry the wrong person. As singles you must ask your self ,why do I want to get married? Marriage entered into for wrong motive can never last. Many Singles want to get married because of sex. So after sex, what next? Some desire to be married because of peer pressure and family pressure, Search your heart very well and ensure the reason why you want to marry is not out of place. Now you have understood the concepts of marriage, the next question is Who should I marry?

Marry a man/woman who is GOD FEARING
Not every man who says he is born again fears God.The word born again has been bastardized, everybody now is born again, even a drunkard also claims to be born again. Faith In God and fear of God are different things.You can believe in God and not fear him. To fear God is to reverence him.To give HONOR to him to respect God. When you respect and HONOR God you will submit to His authority. When there are conflicting issues between the Word and probably culture ,the word God becomes your final authority, so submit to what the word of God says as the final authority in your life. Not your ego as man, or your emotions as a woman. Not your culture,or selfishness. The first thing you look at in that Lady or in that man is that “Is he/she GOD FEARING?
Is there any reverence for God. You are engaged to a guy and he tells you there is no big deal in having sex before marriage. See forget about the emotional feelings ,when a man really fears God his emotions will not override the word of God that he believes.

Must have a Mentor or Spiritual AUTHORITY that he submits to for corrections and Building.
Before you say yes to any one please do find out what authority he has submitted to for accountability. When issues arise at least there must be someone you can plead your case to.Someone he can listen to and obey. By this you are at least secured. If a man does not have any authority over his life, watch out for commotion in that marriage. It’s an iota of arrogance & pride .

Must have PASSION for you and LOVE you Sacrificially.
A man/woman that is not passionate about you will be unfaithful to you . Passion is the dimension of Love that sustains the romantic aspect of a relationship.We call it Eros when Eros is not in marriage,the romantic life of that marriage will be dull and uninteresting, this could lead to infidelity. You must marry your friend . That you are attracted to a Sister is not enough to go an ask her out immediately. IT SHOWS TO YOU THAT YOU ARE INDISCIPLINE It’s just an emotional feeling and may not have a root or dept of Love . There is order in the things of God Let people come and meet order in your life and this will earn you respect all the days of your life . But remember passion is not only what can sustain a marriage. The Agape Love is very necessary ,the SACRIFICIAL love This kind of Love gets the couple committed to each other despite the challenges that may come their way.

RESPONSIBLE MAN/WOMAN
I am sorry to say this. We have many irresponsible men in this century than ladies, born again brothers ,tongue speaking brothers. It is so pathetic! A lady spoke to me one day and said a guy was asking her out about ,38 years no job, no purpose ,no focus, just going to Church and believing God for a miracle in his life and wants to marry? Hmmm before you proceed let me just cheap in this Sisters don’t marry a man that can not feed himself and at least 2 extra mouth. Who is a Responsible man/lady? A man/ lady that is aware of the cost dimension of Life. He does not give excuses. He believes that things has to be done and does them. An Irresponsible person will believe every thing must be done by someone else. A responsible person says Let us do it An irresponsible person expects to be recipients not contributor A lazy person is irresponsible never initiating anything. A man during Christmas told his wife “You are looking at your husband like this ,won’t you buy Christmas cloth for your husband ” Another woman bought boxers for her son and the husband took the boxers wore it but eventually destroyed it because of jealousy, This are heights of irresponsibility.