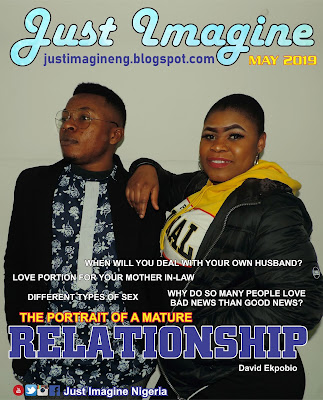 1. RECONCILIATION SEX: Sex is a most potent weapon for diluting and diffusing misunderstanding in Marriage. If you don’t use SEX to settle some stubborn crisis, then you are missing out and not maximizing it. In addition when you both settle a misunderstanding, the person at fault could initiate sex as a way to make up to the other who was on the receiving side of the conflict.
2. HEALING SEX:
There are some sicknesses and diseases that are cured by good Sex I mean very good Sex. Healing sex is gentle, it is full of grace and elegance. You don’t rush it. Mbanu. You do it softly and it hits the bull’s eye. Please Husbands, don’t throw your weight on her if it’s for healing, let the bed carry your weight 100%.
3. PUNISHMENT SEX:
When I counsel couples, are times I hear spouses say “Since he did that, I decided to punish him by depriving him of sex”, or “since she refused me, I decided not to touch her again”. That is as senseless as saying “since my child failed a Test, I punished him by withdrawing him from school”. It’s foolishness. The wise thing to do is to give your spouse more sex as punishment rather than depriving him or her. When your husband or wife misbehaves, correct them using sex. That is the best punishment. Not slapping or fighting or public disgrace. Punishment sex is very hot.
4. MEMORABLE SEX:
This is a very special kind of sex that you organize and plan for. Ever couple must be doing this once in a while. Honeymoons should be organized at least once is a quarter (once in 3 months). If you have means, do it once a month. You book a hotel for say 3-7 days and retreat to help build your marriage. A kind of Intimacy Retreat. You mustn’t go to hotel if you can’t afford it. Just send the kids somewhere and make it memorable. Light Candles around and on the blue or green bulb. Use good perfume and the Angels will bear you witness.
5. QUICK SURPRISED SEX: This is a sex that married couples should do often to build their love life. One “Quickie” is stronger than 100 Love Charms from India or oshogbo. A Quickie is that very fast sex that a couple does in ODD places or in ODD position. Usually one spouse surprises the other with it. You don’t take formal permission quickies. You just start it just like that. MARRIAGES WITHOUT QUICKIES HAVE QUICK PROBLEMS AND BREAK QUICK. Spouses who don’t believe in surprise sex are analogue and expired. Quickies can be done in the car. Drive her to a corner and pretend as if the car didn’t start. It can take place on kitchen sink or at the balcony or inside swimming pool or in garden.
6. EXERCISE SEX:
This type should happen frequently especially in the mornings. God did it that the male organ wakes up in the morning erect to greet it’s Owner – the Wife. So as much as humanly possible, let every wife answer the morning greeting. God’s mercies are New Every Morning. Great is His Faithfulness. Mercy and Faithfulness are co-joined twins.
7. ENCOURAGEMENT SEX:
You use this type of Sex to encourage your Spouse to do something or Not to do something. There are times he wants to do something that you think is not the best of decision, just come in the most seductive way and delay him. When he is exhausted after you have drilled him, speak softly and he will say “I didn’t know that was what you were saying before, now I understand you”.
8. REWARD SEX:
This is the type that you reward your spouse for achieving something unique or for exceeding expectations. Reward Sex is not just one round but extended over a period of time. Reward Sex is an open check to do whatever he or she loves. It’s extra ordinary.
9. PROCREATION SEX:
This is sex you do purely for pregnancy. When you need child, the best style is the one that gives the husband maximum penetration. Support your wife with pillow is you aren’t a long man. But you must make sure it is as wet as wetness can be. Sperm needs wetness to swim inside the womb. When he releases he must remain inside there for a few minutes. Don’t pull fast