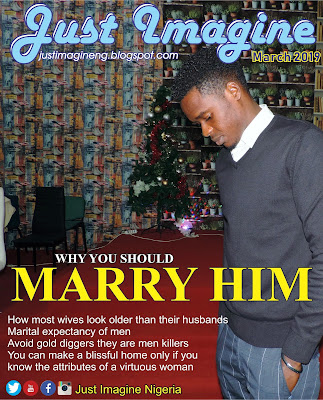 Many a time, I remember hearing that it is better for a lady to marry a man reasonably older than her so that she do not end up looking older than him. The source of this advice I do not know, well, we can easily classify it as one of old wives’ tales. There is hardly any girl growing up in this country who didn’t hear that. Many are still guided by it till today , others couldn’t be bothered.
However, things have changed drastically, these days we have women who are far older than their husbands and are happily married. But if women tend to look older than their husbands even when they are age mates or younger than their husbands, what happens to women who are already older than their husbands even before they marry?
I have seen young women transform into old women soon after they become wives and mothers. When they step out with their husband they look more like the aunty or even the mother. To many it is normal, and even ‘expected’, but I have often wondered why it has to be so.
I have a pieces of advice I think can help today’s women check with themselves to be sure that they look like wives and not their husbands’ mothers. However let’s take a look at reasons most women look older than their husbands and what they can do to get more out of life as women.
When you see most couples in Nigeria, the first question that will pop into your mind is, is she his mother or wife? The reason why men look younger than their wives is because of bad marriage! If you want to tell a bad marriage, look at the wife and measure her looks with her husband. If the husband is looking radiant, and the wife is looking haggard, then it’s obvious the man is an oppressor. Remember I used the word “Haggard” which explicitly points on the criteria of a state of mind. Not on the issue of fashion or cleanliness.
It has nothing to do with poverty or that the couple are struggling, if it’s true the couple are going through hardship, then it will also affect the man. But when the man is looking fresh, and the wife is looking all moody and oldie, then the suppressor is the husband and the wife is the victim. “Some will say, women age because of menstruation and child bearing, then I ask, why then some women with four kids look younger, while some women with two kids look older even though they are of same age?”
When you see a woman who is enjoying her marriage, she looks younger and happier. She glows in the night, and flourish in the day. Even with the chores at home and having to constantly shout at the kids to behave, you will hardly notice any wrinkle in her face even as she ages, because she is happy in her marriage. Her husband is her pride and joy.
But when a man suppresses his wife emotionally and physically, she goes into a web of depression which affects her wellbeing and reflects in her face and lifestyle. She eats poorly, dress poorly and succumb herself to pity and shame, she grows fatter or skinner, and her youth will hide behind the scars. This is the reason most men are ashamed to be seen with their wives in public, whereas he is the architect of her misfortune. They prefer to take their side chick on occasions and parties, and leave the fat or skinny and haggard wife at home.