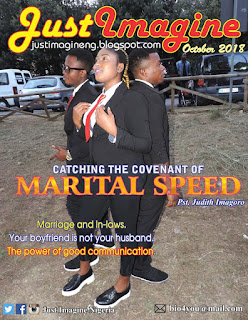 A guy approached you for a relationship, and you tell him, “I have a boyfriend”, boyfriend indeed. It’s very wrong to tell a guy, “I have a boyfriend”, when a guy asks you out. It’s totally wrong! A guy met a lady of 27 years he really admired, he asked her out and she boldly told him, “NO”. Using the word “I have a boyfriend”. Really? A boyfriend at 27 years? A boyfriend has no right over any girl, because he is not yet matured to have a woman, that is why he is a boy. You can only tell someone, “I am engaged or I am married”.
Telling a man that comes your way you have a boyfriend simply means you are still a kid playing around with a boy. You can’t keep a boyfriend for the rest of your life and expect to be married. A boy must graduate to a youth, then to a man. A boy is someone that keeps a girl for fun, a fiancé is someone that want to marry her, and man is that person that finally pay her dowry. Having a boyfriend simply means sex you doesn’t mean you are in a serious relationship or you have a man that will marry you: it simply means, “I have a boy that I have fun with”.
You can have as many boyfriends at a time, but you can only have one fiancé and one husband. Don’t tie down your destiny with a boy. Don’t tie down your destiny because of ignorant. Having a boyfriend is just like having a normal friend. Having an intimate boyfriend is like having a sexual partner, that marriage isn’t yet involved. Having sex with a boy doesn’t mean you guys are committed to each other.
You can be in a sexual relationship and thinks or feels you are in a committed relationship. Committed relationship starts the moment you both had graduated from that childish fantasy, from that childish fallacy and that is when he finally proposed to you and meet your parents. Stop being ignorant. Stop living in ignorance. You can reject your husband because of a boyfriend. Don’t ever be proud just because you have a boy that sleeps with you. Anybody can be a boy or girlfriend, but not everyone can be a husband or wife.