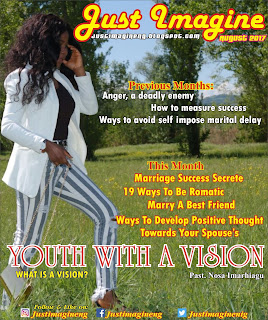 WHAT IS A VISION
Vision which was generally defined as the faculty or state of being able to see, also has different meaning and definitions, it can also be defined as the ability to think about or plan the future with imagination or wisdom. Vision which I describe as the lens that interprets the event of our life, what we see and the way in which we see it. In Genesis 13:14-15, God said to Abraham, as far as you can see, I have given to you. What do you see? There is no big difference between what you dream to become, and your vision, they are similar. The main difference between visions and dreams in the bible, is that dreams are received while the person is sleeping but visions are received while the person is awake and they are “often in the spirit.” Ezekiel also had a vision of the valley of dry bones in Ezekiel 37 where he wrote that “the hand of the Lord was upon me, and he brought me out in the spirit of the Lord and set out in the spirit in  the middle of the valley; it was full of bones (Ezk 37:1). Obviously this was not a dream but a vision.
It is very important as a youth you should have a vision, because it is the bridge between the present and the future. A youth without a vision is like a youth without a future, without it you will perish. Vision gives pain a purpose, let’s use the life of Joseph from the bible as a example. We all know the story of the Joseph and his eleven brothers. On how he had dream, (Genesis 37:5-8) which he told to his brothers, for that reason they heated him. We all know the popular story of how he was sold to slave traders, and brought down to Egypt. This is where your pain in life as a youth should have a purpose. Doe he had a dream on how his brothers bowed down to him, and was brought down to Egypt as a slave, he still sees himself as a king. According to story in the bible, he letter became the head of the slaves in potiphar’s house.
If many of our youth today was Joseph, they will consider their dreams accomplished. Joseph was now the head of slaves, so probably the other slave bow before him, but his dreams was different from the interpretation. He had a dream on how his own brothers bow before him, not other slaves. A man with a vision does not settle where life settles him, but settles where he has been dreaming to be.
This now brings us to one big thing that destroys vision. SIN, youth of these days now sees sin as a normal and common thing, we all believe “if I go down on my knees and pray, God will always forgive me”. Good, if you have such believe but can we continue in sin that grace may abide? God forbid. Such mindset will hinder your vision. Have you asked yourself, if Joseph would have slept with potiphar’s wife, how would he have gotten to where he dreamt to be? Many of us will call such sin opportunities. Probably sleeping with the master’s wife gives him more upgrade, in front of the other slaves. Now let just look at it from the view of these days impatience youth. You are the master’s top slave, and now you are also having the master’s wife to yourself, automatically you can now describe yourself accomplishing your dreams. But I guess Joseph knew two things, first was, his dream was not to become head of slaves, and secondly he knew, sleep with his masters wife will be a betrayal to his master and a sin, not only in his master but also in the sight God. What I am trying to draw out here is, let’s imagine Joseph had slept with his master’s wife, I guess his story would have ended in another way. We all know the end of story, of how Joseph became a prime minister in a foreign land, and how is brother’s latter bow down to him. So the one big thing that easily destroys vision is SIN, every youth with a vision should keep the law to enable him guild his vision, Joseph did.
You just want to make the best of what you make? Why add that thing that you know is not proper to the raw materials, just because you want to make more money and profit? Life is a long journey, don’t take shot cuts.
PRACTICAL IMPLEMENTATION OF VISION
Take is from the unseen world and bring it into the natural realm, this can be accomplished by simply writing down the vision.
Goals are simply the vision broken down into smaller pieces that are measurable in time and space in other words, they are specified part of the mission that we will accomplished by a predetermined date (if you fail to plan, you plan to fail)
Establish your step. The bible talks about God been with you in every positive plan you make in Psalm 37 23-24; the steps of a good man are ordered by the LORD: and he delighteth in his way.  Though he falls, he shall not be utterly cast down: for the LORD upholdeth him with his hand.  Same in Proverb 16:9; a man’s heart deviseth his way: but the LORD directeth his steps.
TOOLS THAT HELP YOU VISUALIZE THE MISSION
Testimonies of others who have accomplish similar dreams
Architectural drawing
Create a plan accomplishing the mission.
All youth are expected to have a vision. Stay focus on your vision at the appointed time it will speak for you.
Follow and Like Just Imagine Nigeria
Facebook           Instagram           Twitter